Time Trailing Training is all I can comment on at this stage. The actually competition side of things is something I am yet to experience. What I can say thus far is the mental challenge is huge. Pushing and staying on the limit both physically and mental is obviously key. Even the challenge of holding position on the bike requires constant attention. The duration of effort add to it with long periods of focusing on maintaining movement, aero position and effort is at times blood hard. It's a different World to maximal a effort for 2000m of a rowing race. The high intensity is not there and the sheer aggression is obviously less but I tell you the subtle pains, discomforts and energy drain is unbelievable. It is as if your being tortured, slowly having the screws turned and with each twist the searing heat builds bit by bit, moment by moment. Even in these efforts the phases of feeling completely finished only to find a minute later I was back on top and feeling strong again. So the intensity is less but this TT training has shown me a new World of sustained oppressive fatigue. I love it but it is taking it's toll and it is taking time for me to adapt. So much so my body is transforming dramatically from rower to cyclist, slowly. 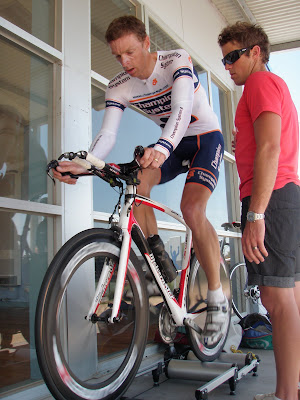 Here I am on rollers and you should have seen me starting up. So close to coming off a few times. This was my third time on them and we were doing this for 15min prior to 2 x 30min on the track at threshold. Even here I was sitting on heart rate 165-170 as Jono had me doing 420w just to get my little legs warmed up. I guess you could say I was well and truly warm by the time I hit the track. 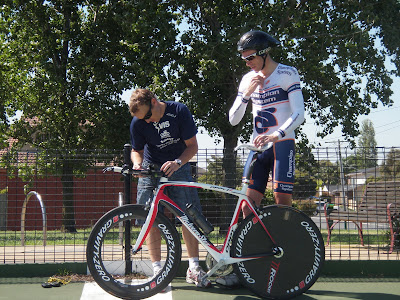 Here we are, Jono sorting out the speed sensor on the SRM system. The Malvern Star bike has been converted from road to TT set up. This was just before we began the two 30min efforts, which I can tell you are not easy. Haven't got the data back on the session yet but I can tell you the first effort was pretty intense. Heart rate was around 170+ for the 30min with target power of 420+. Unfortunately I struggled during the session with the target which we discussed and felt residual fatigue and the fact it was very windy. Each lap would involve speeds ranging from 49 - 42 km/h with power fluctuation of 100w. Trying to be consistent was tough and the drain of being hit by the wind every 30sec was a challenge. I have some video of the session to upload at some stage to.

A few thanks you's I have to make are to the Team at Pac-Brands with getting me the bike. Jon Hall & Raoul Luescher for all their hard work, bit's a pieces of bike parts to turn the Malvern Star Oppy into a TT bike, and the their guidance with the set up of the bike and training has been amazing. Not to forget all the great conversations about performance. Even having Jono ride with me and really help with my learning as to have to improve my riding. Chris from Champion Systems for a speedy turn around with getting me an aero suit which by the way my wife thinks looks rude. My wife ain't to happy with how skinny I have become and she thinks the suit makes me look even skinnier. I prefer to think of it as looking fast, lean and hungry even. There has been a number of other people who have helped making this all possible and into I will continue to show my gratitude.

The learning has been huge and the curve steep. I have a long way to go but I am committed to pushing myself as far as I can. Having great people to work with means that I am going in the right direction so energy and effort is not wasted. Oceania Champs is less than a week away now and it will be my first chance to perform which is exciting. What ever the outcome it will be step along this journey and one which I will make sure I build on.
Email Post
Labels: Mental Challenge Time Trial Training

WW said…
all the best this weekend Drew. I won't say good luck because I'm quite certain you don't need luck. I was behind you on the Hell Ride and you're flyin!
10:21 PM