'The Four With More' 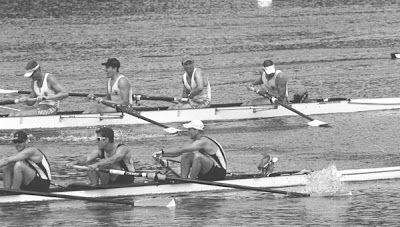 What a wonderful sight, four men of courage and the beauty behind the wheel.
We had a great time in the one off performance and it came after many beers were consumed and Michael and Henry propositioned us about jumping in the boat together. Mind you I think that thought it would never happen. So much so that a few others witnessed them go into a melt down when the final realised it was on. Two guys have never done so much in 24hr to get a boat rigged and spend much nervous energy worrying about how they would let us down. Like two cats on a hot tin roof they could keep from dancing around. We had a great time and just to put the pressure right on them before the race I said, "reputations are on the line here, so you two better not stiff it up" We all laughed but I could see they had that sense of oh shit we are actually going to do this. Talks cheap as they say and so the only action required after the initial joking about doing the race together was to make sure it became a possibility. Michael girl friend and club cox was behind the steering wheel and did a great job of keeping the energy levels up and motivating what must have felt like a heavy cargo ship. Doing a club boat like this was a real joy and they do say to know true happiness you must first experience a struggle. Well after some 1000m we certainly had a little struggle on our hands and even though we got rolled for third place there was a genuine enjoyment for jumping in the scratch combination and racing for fun and the thrill of the competition.
Email Post
Labels: 2008 Coxed Four Mercantile National Championships

Master Yung Young said…
Disciple, I am heartened by your willingness to purify yourself through pain.

Over the next 147 days, your resolve will be tested, your awareness of pain increased, and your philosophical and mental development will be unparalleled.

You will still not be at the level of your master, but you will be better than any man who has come before you.