What's Up with U?

It would appear lately that I have gone backwards, forwards, side to side and maybe even still a little off center. I have received many questions from family and friends about whats going on. Well it has probably been less direct, but the essence behind various contacts have come from a place of care or concern. Checking in with me in a way just to make sure all is OK.

I guess how I feel relates to the image below. 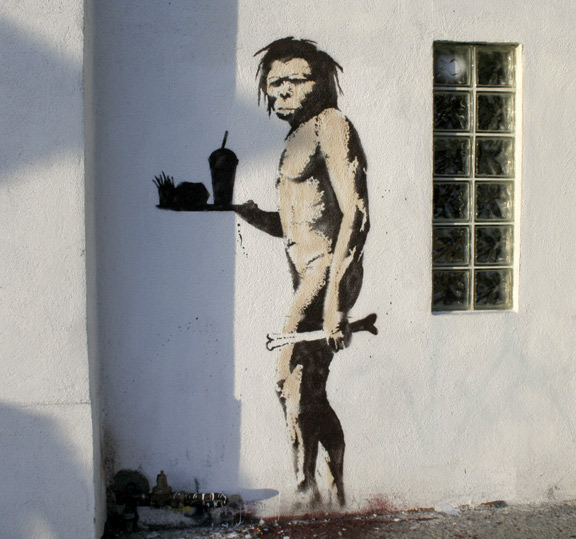 From this I have to tell you that at times I feel ape like in a civilised World. The instincts and earthiness of the past courses through my veins. It feel often like a throbbing, pulsing surge of energy which creates imagery that influences my actions and expression.

Mostly I can't fully explain or even come to grips with it so I struggle to articulate the experiences at hand. What's up with U? is about backing up or reminding myself of recent outbursts.

Yesterday I completed a second lab test on the rowing machine. It was terrible in terms of outcomes, but amusing and enjoyable as an experience. How can I be loving the feeling of being so far from the perceived standard of performance which I had come to know or be aligned to consistently.

It was a VO2 Max step test. It was a battle to stay with the effort and fatigue as each step ramped up. The early feeling of movement and control was past like a little buzz box on an auto-barn freeway in Europe, standing still as a high performance vehicle races by. The feeling of concentration and control disappeared down the road. Racing away out of sight I was left in it's wake. The procession had passed and the fight was on again. Most intense activities at this stage on the rowing machine are a struggle. A struggle to let go of what I know it should feel like. Struggle to find away through the haze of gasping air and thrashing of thoughts as I am tossed from side to side while even the movement goes and my will to stay engaged is tested. The physiology numbers can not even come close to telling the story. For the refined feeling of sophistication is striped away. I am left with the tools of the modern World in my hands, and the primitive aspect of self has returned.

This is why I like the image above. It relates to the lab test yesterday but it also relates to the road I have traveled since the Games two years ago. The Games feels so long ago. The distance of time that has passed interferes with the identity of self. Or at least the identity of self in high performance mode. The gap has become well and truly clear. The gap between sophisticated high performance and primitive raw exposure is my new reality. I have a long way to go and the reality is clear. I am not who I was nor will I ever be that again. The future will be part man part animal as my instincts assist me to navigate the oceans ahead.

This is what I have been referring to of late. Confusing though that might be I am finding myself again. Pain does funny things to us. Success and pain add an extra twist to the equation.

As one Einstein's quote states: You can't solve a problem at the same level of awareness that created the problem.

This is critical in my understanding. I am realising certain errors in my way of doing things and trying to resolve them. To come through this as a person, husband, father, son, friend and athlete is a great experience. Again the outcome is less interesting than the experience I am having.

**Results: Slightly better than before our family holiday, but still some way off even normal domestic level. Actually out of all lab testing since starting in 1993 with VIS these are the worst score ever. VO2 5.69L/min or 65.6mil/kg... This wouldn't get me through an apple dunking competition at a carnival. Compare the numbers to the best I have had of 6.1L/min and 76mil/kg and it looks bleak. Bets even distance for max step of 4min was 1.28 per 500m or 1358m distance and yesterday was 1237m. I think I remember seeing a little 9year old kid in Italy out in a single scull who I am sure would put me to shame right now.


For now it's about each step. One by one with intent and care. Purpose and focus. For moving freely again is the goal.
Email Post
Labels: Banksy Primative VO2 Test What's Up?

What are your scores like when you have been testing on the bike do you have biketest scores when you were at peak fitness?

How do they match up VO2 wise compared to what you are doing on the erg then and now?

Because if you are performing well on the bike now compared to before then there is likely litle wrong with your engine?

Is the issue then the mechanics of how you are moving and a lack of strength or mobility in your back that is putting the brakes on meataphorically speaking.

If it's not that and your'engine' is working ok then maybe the problem is more a mental one and there is a construct that you've allowed to creep in somehow.

Just putting it out there.