Found this slide in a presentation and love the notion of CHANGING THE GAME. It can many many things to different people so the context relates to our own situations, abilities, motivations, attitudes, relationships and emotions.

It hits a mark personally and I think there are those who set standards, leading by example, going beyond the norm, stretching and pushing the envelop and then those who chase after the standards, examples, results and so on. Then there are other who maybe miss the point and are just happy to be there, to be part of it, involved in anyway. Even as I write that I know full well that we are rare just one of those types of people and often we oscilate between each depending on the situation and who's around.

I love the idea of changing the game. It is an exciting idea, an energising idea, an idea the lifts and thrusts things forward in to new ways of doing things. 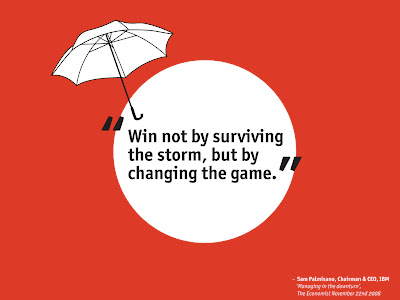 Those who come to mind as 'Game Changers' include:

Admittedly these are current and I am aware there are more, but they are who come to mind in sport over the last 10 years.
Email Post
Labels: Change the game Game Changers

Vinita said…
Changing the game ? that's a nice idea. Makes things a lot simpler. Applicable not just to sports but to real life as well.
3:57 PM

Claudio said…
Another name for "changing the game":
Yelena Isinbayeva
2:58 AM