The end of our little camp 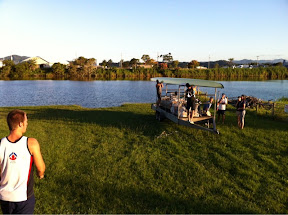 Haven't been very active on my blog as I have been busy. Between training, family time, lounging around the pool, hitting the beach, sleeping and planning it's been a very full few weeks.

Did I say we have been training? Yep probably our biggest weeks of the year so far. What do you do when you get so tired from training? Well it became slightly easier to recover with the pool at the accommodation. Time with my wife and kids has been perfect as the block of work ahead will provide me with less time to hang out with them. The beach was just a couple hundred meters from where we were staying so you guessed it we had some fun down there too.

All sound like to much fun really. Was there any real serious stuff about this trip? Sure my aching body found it pretty serious most days trying to keep up with my mind. Actually the regular massage from Murray Crean who lived only a couple of blocks from our accommodation was well needed and I hope deserved. As I said my mind was dragging my body out of bed and into most sessions like I was a fresh young kid who's enthusiasm for a challenge was fantastically outstanding. My mind would race ahead and then call out effectively for my limbs to chase it down. On the river at times I found myself slipping into what could possibly be described as a moving coma patient. The lights were on but no one was home. Each time this happened my mind would notice this disconnect and would come racing back to find me on a long stretch of the tweed river and kick me back into gear.

The game was simple really. Plan to find limits. Then push to find those limits from the planning. After some time the limits became somewhat trivial. Pushing, finding, going past, and back again. After the hours began to pile up it seemed like any self imposed limit would not stand for long. My body would say no and then moments later I found my mind had imagined a way and they my body was following. The hours added up between long rows, bike rides, ergo and wattbike sessions, the gym was graced by my body too. Indoors and outdoors we ranged. Up the river and down the river we roamed. Scouting in and out of fatigued states while push each stroke as far as we could. Pedals went round n round and with each cycle we strengthen and got faster. The bed I shared with my wife got a work out but not like you would think as I would sneak between the sheets ever chance I could get to take flight to slumber land. I departed and returned only to find I never really left and what was still to be done was more effort and ease balancing.

We are in our four. We are a crew finding our way. Will Lockwood, James Chapman, Josh Dunkley Smith and I have started well. This camp was two weeks on the back of completing in our trials and have been selected. 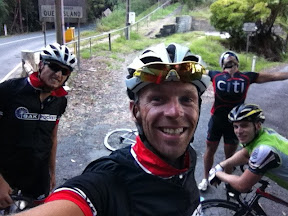 Our camp has ended and the first part of the foundation is laid. We have had fun and we have trained well. Since the selection trials I have write many thing in my private journal and will in time share some of these things. for now though I like the idea that we can get on with the job of preparing. Our task is simple. All we have to do is make our boat go faster than anyone else.

We are not the best and have not been the best. We are just another crew who has motivation and energy to perform our task. We are just another team learning to making the sum of the parts greater. We will not walk away from the challenge of competition as this is what we are measured by. We have come together to be better than we are apart. We do not fear failure as we as a team have no track record or huge expectation. We are not leaders, nor winners who a grinners. We are though a new team loving the chance to go beyond anything we have know so far. Alright alright sound pretty fluffy I guess. 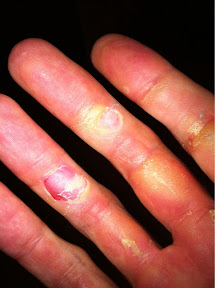 So let me pull it back down to make it somewhat more real. In the last two weeks we have agreed to something and yet it's not complete and only really just begun. Personally I enjoyed this time together and the balance between work and rest, even if it was pretty much skewed to work by a long way. I care little for what other think and don't get hung up on history. I will continue to train and prepare like my life is on the line. The fight in the old dog has certainly returned. Learning new tricks is something I am compelled to do.

One thing is sure though at this point in time when the cells in my body are screaming to stop and this has happened during many of the sessions in the last two weeks, I have found a place that has enabled me to push further, move better and stay on top of things. That's it really. If I can keep pushing, improving and recover and do so with those in my boat, we will go well.

**PB's this week involved longest session on an ergo. Longest row in a boat since 1997. Highest sustained percentage of max heart rate since the hour time trail on the bike in 2009. Longest stroke length in over 12 months. Biggest week of training since 2008 and still smiling.

Andrew AOC said…
Drew you almost write as well as you row. Love reading your blogs thanks for taking the time and so impressive where you are taking your body and no doubt the Four. 101 days to go until cauldron is lit. :)
1:28 PM