Recently I have received a few questions about our boat and recovering from a back injury.

I thought it easier to respond here:

Our boat is a new design and in the early stages we relied on certain indicators about possible speed gains. The shape has changed slightly with a slightly longer, narrower and deeper mulled. The obvious difference is the appearance of the bow, which looks sharper and has more of a butted end. This is not new as many boats now have the style of bow. Basically most of our time with the boat has been spent playing around with our position within the boat to maximise the trim of the hull. As for being able to quantify the differences, well we can't. We have video, which shows less wake off the back of the boat and cleaner lines. As for speed gains we just don't know that, not because we haven't tried, but because it is very difficult to measure. Over here we have had little time to test and combine that with very different water temperatures to when we are here normally it makes it tricky to pin point changes. We have to trust our coach’s perspective and trust our own feelings about the new boat. 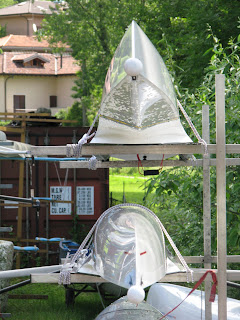 As for more info, well. That is about it really. We will race in Luzern and get to see in those conditions how it performs. One thing though and it goes back to an old saying. A good craftsman doesn't blame his tools. Now it is obvious I know but a good craftsman also is smart enough to work with good tools and that is something we are confident of.

Moving on to the recovery from my back injury. I will keep this brief because there is much more to it that what I can explain here. The benefit for me was in having surgery that alleviated the pain, which enabled me the do, the activities that would promote a health back. Pain is the sticking point with any injury it is a way of your body telling you something is not right, but it can inhibit the ability for us to get things right once we have had pain for a long time. The nerves in my back from what I can understand had become irritated to a degree where even the slights thing would set them off which in turn would shut down the stabilising muscles in my back. It is a viscous cycle and one that had repeated many times back in 2000. My choice to go under the knife was not taken lightly, but did provide the relief from the pain. From there it was about baby steps as they say. Each day was simply about making a small shift, finding some improvement and making the slightest gains towards normal function. There were days when I would find things had gone backwards and so staying positive about it became critical. For me I found great benefit in walking each day up to 3-4 hour. Quiet vigorous actually as I really got into the idea of more blood flow better healing. Add this to some simple stretching and activities I described as infant development movements. I gave a great deal of thought to how I first learned to roll, crawl and walk and used it as template in my mind for getting myself back to be able to move again. So lots of rolling on the ground, extending, curling and getting into a crawling position. Finding ways to activate the deep stabilising muscles and structures becomes a focus. During this time much of the influence of a good friend Mark McGrath came into play. And as such my body awareness developed with fluid, function and ease of movement in mind.

Obviously that is the tip of the ice berg as they say, but it is pretty much what I focused on. The only other thing was I let go of the idea of rowing through most of the process. This only change some time down the line when it seemed like a natural step in the recovery that I was doing. To get back into the boat was part of developing again. Eventually having a goal like attempting to get back to elite rowing helped when the time was right. But in the early days after the surgery I was just happy with not having the pain any more. That made the World seem ok again.
Email Post

I remember seeing you being so diligent coming back - not pushing it too far too fast- and making sure of recovery rather than reinjury.

Very disciplined and thoughtful of you to do so, and a good thing to reflect on.

I wonder if the path back to elite rower from injured person was a driver in your post regatta remarks in Athens - wanting to row every boat in Beijing, not retire.

Nice to see you and James in good preparation and good form in the lead up to the Olympic regatta.

See you in Beijing, soon!