It's been two weeks since the Worlds and I have enjoyed the time with family, getting back up to speed with my work and doing a few activities to keep active.

Before I go to far I must mention getting my rib rescanned late last week and getting the good news that my rid has remodeled very well but the bad news is the arthritic joint looks worse. Will be looking into what can be done to reduce the pain and in any way assist with keeping it mobile.

As for much of my time off it hiss been great to hang out and play with the kids. Yesterday we went and had a hit of tennis. Also Jasper has been made trying to do hand stands. Here's a little shot of him and I practicing. 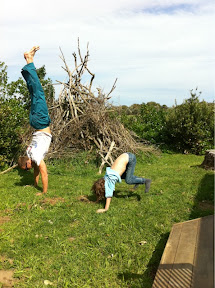 Also yesterday while down the coast at my dads farm we went to the beach. I had done a quick surf check to see what was around. These are a couple of images of the coast out in front of the farm. The shots of the wave aren't great but there was a decent swell running so when Mel and the kids were ready we headed down for some fun. 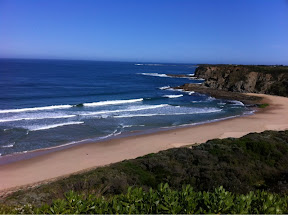 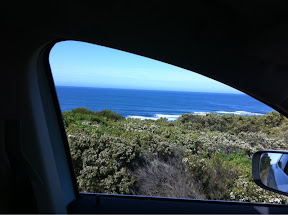 It had been a while since I was out in then water. Between getting back into rowing, work and the my rib things just went against going for waves. There I was yesterday paddling out and it felt amazing. The water was pretty cold and my hands were aching for the temp but I was buzzing for how it feels to even just be out in the ocean. As I paddled around through the channel and the current swept me into position a set rolled in. Bother huge but as I spun around the feeling of being lift up was a great reminder. Straight away with out even thinking I jumped up and was into it. That feeling of dropping back down the face and swinging off the bottom was so enjoyable. Being on one of my spare boards which is longer I turned slowly or that just could have been me being a little rusty. The wave started to break down the line and even though it was a bit fat and full I loved riding it to the shore. After I rolled under the last section of white water I popped up with a big smile on my face. Such a great feeling was the thought as I began to paddle back out.

It wasn't a long surf but it was great and even for my body it felt like it got me moving again. As for other activities since returning to Australia, I have done three very short ergo sessions totaling 50min and a total of 30min of the wattbike. I guess these days I prefer to stay active even if only low volumes.