What happens when things don't go to plan?

Free hit by a car 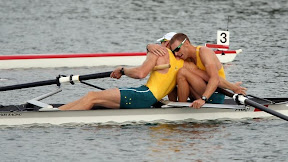 Well what a week. Personally I feel like I am pretty good under pressure. Actually think I get better when it comes on. Doesn't mean I don't get frustrated or make porridge decisions, just think we things go wrong I tend to become more resolved, focused, and purposeful.

This week has been a test. Working on program all week while training in the boat with Josh. Very early starts and long days and late nights with last sessions at 9pm to get everything done.

Plus a great friend gets hit by a car on his bike. Makes you stop. Makes you scared for his life, particular when the first details are a bit sketchy. Having Duncan in an accident just brought up so many feelings. How quick things can change. How life can change. Loss and fear. Emotions flow and memories come flooding back. How close it could have been to being fatal. Scary stuff when you think about it.

Apparently he was not long on the ground before expressing his frustration at what he might be missing out on and that feeling of letting down you team mates. He knew he was ok but his leg smashed with eventually being shown to have his femur being broken close to the hip joint. Hear about flips through the air and hitting the car/trailer at some 40km/h and it conjures up all sorts of images. He is a big body and would have look amazing and awful all at the same time. Apparently cirque du sola have been in touch so if he doesn't make it back to rowing a new career may have emerged. All jokes aside though. I was and am just so relieved he is ok. 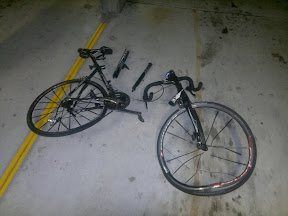 When I say he's ok you know what I mean. What's not ok is his bike above.

Now with his new challenge he will reset and then start back towards his goal. London and he assures me his is as motivated as ever to get back in the four long term.

Plenty of athletes have had there direction changed by a single moment. With out details I can think just a few who have in just one moment have the Olympic aspiration change. Personally having been through it in 2000 where many bad decisions where made and so many things hampered the preparation with finally my injury stopped me from competing at the games.

Guys like Alex Partrige come to mind back in 2004 and Tim Foster in lead up to 2000. Some times the impact of injuries or illnesses to show much more than a slight form drop. But other times seasons are written off like for Duncan now. Sad thing is way back in Dec and Jan this year Sam Conrad another Australian rower was well placed for this season only to be ruled out due to a virus from a Queensland tick.

With all this in mind it's easy to get frustrated and loose sight of what matters most. If what matters most is still taken care of then it's about the next thing which is the long term objective. In this case it was Duncan not being hurt in a way that it might not have been recoverable. James Cracknell had his recent accident and it reminds us that life is precious and great to hear him recovering but I am sure many times it was very serious and scare for family and friends.

Duncan is planning to be back in four in London. But what does this mean for us now. We have to get on with our job of making our boat go as fast as possible. My issue is my rib has shown signs of the fracture returning. With last night a restless experience when I realised my rib was aching again. Now my week has been turned on it's head again. Appointments, scans and new plans will be made.

What do I do? Let go. Forget my other plans and make new ones. Meet with Josh this morning and found myself discussing the future but with a reality of have within thur next few days my season could be over too. 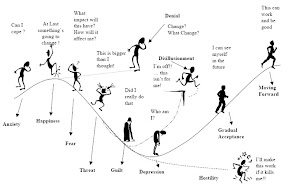 Now like Fishers model grief and how we deal with it fits a similar process.

Dr Elisabeth Kübler-Ross pioneered methods in the support and counselling of personal trauma, grief and grieving, associated with death and dying. She also dramatically improved the understanding and practices in relation to bereavement and hospice care.

Why mention all this on the back of Duncans accident. Well it's probably obvious but for me and many athletes it's not until your in the process that you can fully understand what it's like when things go so wrong. Flip so quickly and change happens with such ferocious speed that your head spins and emotions go wild and you are strapped in for one hell of a ride. Not limited to athletes though so don't get me wrong here. We all experience moments like this and gain perspective is critical and resetting in someway needed.

What do you do?

Right now I am going back to the start. Most important thing now is to relax and enjoy my life with my family. I feel tired but with a good nights sleep I hope to be able to start thinking through the way forward, slowly, deliberately and with a sense of possibility for a great future. Guess I am an optimist. Next steps will be planned then if possible rowing will be worked out and if not then that's life.

The Multisport Brain said…
Hey DG,
We read with great concern, interest and then relief, the news about Dunc this week. Only pssimism, negative energy and agenda can stop someone as strong as Dunc. The plan was just the shortest route to your chosen destination- London. There are many routes both direct, non direct, cheap, expensive, boring, spectacular and the list goes on. Duncs accident just did you the favour of not taking the most direct and potentially most boring, cheap, unexciting route to the SAME destination. I am sure that many more people than me have been at first concerned by a wrong turn from the initial route only to discover a route which enabled us to arrive at the same destination but with a suprise along the way which we may never have found.
Strength to ALL involved- it will take a united front of positive energy to to rise above missfortune but you know as well as I do that this will make it all the more special in August 2012.
1:00 AM