First row for the new year, and well it was interesting.

Yesterday we had our first row for 2012. And while it eventually turned out ok it did not start so well. As it is often said a picture tells a greater story than words. Here are a few photos of our first row. Actually we didn't even get one stroke in. The focus before the row was to challenge ourselves to row longer. Something about being competitive people comes to mind and that oars probably should not be put parallel to a boat.


Add to this that all athletes should not lean to one side and look to that same side at the same time. Plus if you have any nervous ones on board who bail early when things look some what precarious you should probably take life jackets out. 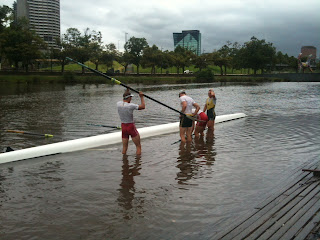 For my part I certainly didn't help things as at my age the reaction time has slowed so things did seem like it was just a sow roll into the water.


Since though I look back and realise we all felt so damn good about the Yarra river that to go swimming was just so natural and right give the hot weather of late.

The on lookers at the sheds all seemed to enjoy our diving and swimming style. Hardest part was getting my feet out of my shoes. Thought I was going to drown at one point and was only motivated to try extra hard to pull my feet free when the two big guys beside me started moving in to help. I had images of them trying to revive me on the bank if I did go under and well it was amazing how quickly I thrashed to release my self from the boat to avoid that.

Now just to remind people yes we are a so called elite-ish crew or athletes. And yes we are planning on big things this season. This probably won't be the lowest point of the year but it will come very close. Thing is we had a good laugh about it and that probably says something.

Carol said…
Thanks for the laugh Drew, made my day!! Wish I had been down there to see it though!
Cheers
Carol Cooke
3:39 PM

marakejo said…
woot woot! Daughter recently turtled at the pontoon on first outing in just delivered new single and was Soooooooo embarrassed. "Just checking flotation and capsize safety drill" was drowned out by laughter. Your post has made our day!
7:31 AM

Love the blog and the candor of your comments. If this was the low point of your season, best to get it out of the way early and have a good laugh! I flipped my 1x for the first time since 1993 last fall and I totally get your comment about things happening in slow motion. As someone a few years older than you who also wants to keep competing at a high level (not as high as you obviously), you are an inspiration. I am an American but believe the AUS rowing system is the best in the world and I always love to see green and gold on the podium at the Olympics - go get 'em!
12:45 PM

Phil said…
Why so hard to get the feet out?
Serious safety point here - did the shoes have heel release cords fitted? How long were they? Were your feet done up tight?

There's a message we can all take from this.

Simon said…
Drew, thanks for the laughs!

Love your blog too but have to agree with Phil - it would be at least interesting to hear what caused difficulties extracting your feet. There is always an opportunity for learning from these incidents... especially where it could save a life
10:30 PM