Phase one has begun with the initial sessions with Master Yung Yung. What can I say this funny little fellow has extraordinary insight and the things he can do with his body have to be seen to be believed. He is not big in stature but you can sense his huge heart and passion for getting big, and big fast. What has puzzled me in the first few session is his quirky way of looking at the world. I mean what he says and does can sometimes seem to be from an old eastern text. The wisdom is awe-inspiring, but then at times he flips out into a weird western military style soldier commanding his troops. Barking orders and directing traffic with such energy as to confuse not only his opposition but also is fellow warriors. 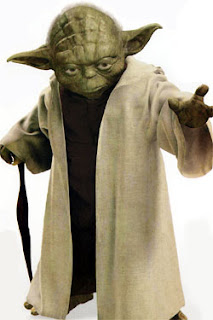 He is like Arnold Schwarzenegger and Yoda in one profoundly unique individual. Never would anyone have considered it possible to see two vastly different creatures merged and molded into one super human. Master Yung Yung is a super human of the highest order and I feel privileged to be his be his student. I am not the only one though there are a small few who he has taken under his extremely large wing and he will help them shape their own destiny.
Email Post
Labels: Arnold Schwarzenegger Bike Training Master Yoda Yung Yung

Anonymous said…
You are learning the arts of the Yung Yung my jedi friend. You have to much time on your hands Ginn!

Anonymous said…
Yung Young has the mind of a mechanic and hands like a surgeon.
8:46 AM