Update: Life on the road


Life On The Road
It's been a bit of whirlwind getting around to the various states like WA, SA, TAS & QLD. This has not been an altogether easy transition and I would be lying if I didn't say I still have moments when I wonder about the challenges and enjoyment of rowing a boat. Planning for further visits are in the pipeline and obviously with that will be a trip to NSW. It’s amazing to see rowing in all these different locations. We have many great people in our sport and being able to meet and learn from them and to find out about how rowing is appreciated and delivered. Australia is a huge country and rowing is a sport spread out to every corner pretty much.One thing I keep being reminded of is that the life of a person involved in rowing in whatever form is generally pretty raw. We do have gaps though in our rowing community. We are one sport amongst many and so I do think we need to keep working on find ways to better support each other and to often become creative about how we might increase our chances of having a health functioning system. The flow from school to high performance is in one sense not what it needs to be and yet there has been efforts made it still falls short. Sitting in speed boats with coaches has been on these occasions difficult. I find myself often reliving those simple experiences of feeling a boat run, of the flow of the rhythm and the dynamic sensation of driving the boat through the water.It helps me in my new role to though.I think I have a great appreciation for what I am seeing at times with athletes and crews. I find it easier to slip into athlete mode and wonder what the feeling might be for those I am observing.The reality is, it’s another perspective and although I am yet to get use the loss of sensations that come when sitting in the boat I do notice I use my imagination and try to put myself in the athlete’s shoes or seat depending how you want to see it.

Greater Measurement & Integration of Technology
After having come from sitting in boats motivation to find ways to measure and monitor, benchmark performance, learn from personal experiments, and working with a team of people to ensure we track progress and ultimately ensure deliver results.The change then has been to take the same approach and work with Chris O'Brien, Jamie Fernandez, Wayne Diplock, our coaching team and athletes to bring great awareness for the measure we can use as a National Team and set new standards that will challenge all involved.We will measure more and manage people better and make better, smarter decisions and I love the idea of creating a high performing and effective team. Now this involves our leadership team, coaches, athletes and support staff. We need to do better with what we have and we will if we attend to the basics and fundamentals of how to build our learning and performance culture.

We have technology but unfortunately it not integrated and certainly not simplified. Personally I care more about the patterns over time as I believe performances can be predicated to a high degree. Sure things can go wrong but what I am referring to is belief which athletes and coaches need leading in to major events.
Speed Boat Observations
What’s interesting is I can see when a coach makes a positive or negative impact on the boat. I probably sit in the speed boats and just listen and imagine again what I would be thinking and feeling as a coach communicates to an athlete or crew.There are many positives but also I am surprised out often how to much is attempted by coaches and the various internal conflicts for athletes trying to do what’s asked plays out against the feeling or even feedback they are getting from their boat. Funny thing here to is watching and athlete who thinks they know better without an openness to explore. Then when I see this the conflict is within and external with the coach also. Its not always obvious but to me the clear frustrations on both sides build and neither athlete or coach get the best out of the situation or themselves.
The great things I have seen though are often those moments of realization for an athlete and coach. When the seamless engagement becomes clear, it’s like a bolt from the blue and I have seen smiles on athletes and coaches faces in those moments which bring me back to the magic of sport. Something clicks and realization is like an announcement being made that we have something here. Something to be enjoyed and reminded of, it’s as if an interaction of two into one hits home.Sometimes it has really lasting impact too you can see the rest of the session just flows. It’s as if each party was waiting for the door to open. An invite to be received and to finally let go and make the most of the session. I am not sure but it’s like a release of sorts. Sometimes it’s the coach before the athlete and other times the athlete before the coach. A little breakthrough in skill, movement, clear communication, effort, flow and insight can be the difference between an ok session and a great one. Funny thing to often when I have seen this in the last three months not much is said, just a node or a slight smile and simple acknowledgement and you’re on your way.


Demands Of RowingThe demands of rowing are extreme at times and the loads on a row during training and competition are often not well understood. Unfortunately to race Internationally over 2000m and be competitive we need to work towards dealing with the natural demand and loads. To increase boat speed we have a few simple things which make the biggest difference. The capacity to drive the boat further each stroke involves power, speed of movement, connection to the ware and timing. The nature of the complex system means that with better connection load increases. Add to this our demand for greater power and the dynamic loads through the body increase. Building capacity and efficiency are critical to success and as such we cannot hide from our sports demands. On top of this if we time our movements better and coordinate better we become more efficient and obviously how we run the boat between stroke is another essential ingredient to success.

Moving ForwardAs a way forward we have attempted to simplify selection. Importantly though we must acknowledge rowing is challenging and the demands are huge and loads often significant. Rather than hide from all this which is a critical requirement of our sport we must embrace it and be better at learning from it and utilising it to ensure we are robust, strong, stable, capable and ready for high performance events. Greater education and a more systematic approach must be taken. If we aspire to be great in rowing we must learn from the loads, the demand and master the art or rowing in relation to the true nature of the sport. We need to refocus our high performance area and as a result many change will be implemented in line with the requirements of rowing training at the highest level and the demands 2000m racing.

**I use this example as I think it shows that we adapt well by building up things like volume, loading, intensity etc.

My Example: Systematic Preparation & Building Back After InjuryDuring rehab from my second back surgery he went about a systematic approach involving more ergo work. This involved 3 to 4 session per week which were built up over months of fan setting 10. The highest load on the machine to develop resiliences and strength in his movement. These started out as repeats of 1 and 2 min efforts with splits ranging from 1.40 - 1.50. Over time these were built up to 6 x 10 and 4 x 20min efforts with the splits ranging from 1.38 - 1.45. Extra ergo sessions in these week involved took total number of ergo session to 6 per week and included further work paddling on drag 130 and threshold work and effort of 7 - 20min on his best 6km pace. Over the first 6 weeks the ability to deal with the load of fan setting 10 was evident and his capacity to produce high outputs repeatable at Threshold set him up well to start his return to the sport. By 3 months and time on water increasing the notion of having a weak back was all but fully forgotten. 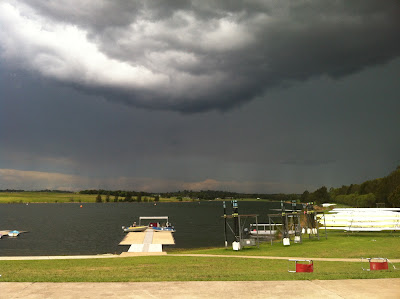 Last week racing was delayed to allow for one wicked storm to roll through. It was very interesting to be involved as one of the hug team running the selection event for our World Cup 1 team. In the past Australian rowers have been held in high regard for having great technical skills. I guess as an athlete having been focused on what we were doing over the year and taking notice of certain crews at our local events I found it a surprise at much of what I saw last week. This is not meant to be a criticism but it surprised me that so much effort seemed to be going in with what seemed like far less reward than I would expect to see. We have a large group of new young and developing athletes and the name of the game now is to continue to build capacity while ensuring the skills required are increased to the highest level. The great thing is the enthusiasm I see and the wonderful nature of young athletes who with little fuss got on with the job of trials. It was a very solid few days and most kept a smile on their faces.