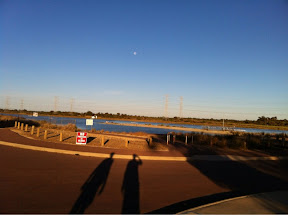 WA regatta centre. Hot, dry and got windy at times. Some fast and slow racing over the week. All I could think about was the serenity.

**Sorry for delayed post this was after Nationals when I was flying back. Taken me a week to remember to publish it.

As I sit here on this plane and take the time to consider the last two days. The mix of emotions that ebb and flow as if like the cycles of a sea or river occurring continuously. In 48 hrs I have enjoyed the full range of experiences. Its as if the intensity of competition and the fuel of motivation have become even stronger with age I figured I was mellowing but it's quiet the opposite. Yesterday we raced pair and four and today we races the state eight.

The news in our camp was not all good though as Duncan was ruled out from racing the four. He would fly home to get on top of his minor injury to ensure he's ready to roll come trials. Our four then would be set to race with the aid of another strike sider.

Racing is as racing does. It's all about getting in the boat and letting it happen or at least that's the way we sort of describe it. This is in part to maintain a relaxed approach but also out of confidence that we feel capable of rowing fast when required. For young Joshua and I it has been a good 18 months together where we have been able to maintain our combination and continue to learn about each other while improving what we do on the water.

We are both pretty casual about things. Or should i say we can stay relaxed and even sometimes appear less switched on to perform. At least until things get serious anyway. No warm up rows, not to much needs to be said before races. We choose less rather than more and as such let our actions pave the way. Now this is not to say we don't speak, we do. Actually we have spent a great deal of time together and at times we talked and discuss things greatly. We are open about what we are doing, how we do it and what we want to achieve. It has not been all smooth sailing yet we have managed to time it, run it well and aligned our peaks together and certain meet the requirements of competition. In Australia currently we have been part of heaps of great racing and plenty of it close.

Yesterday in the pair it was something special to be able to sit on the start and feel certain about what we had to do. You know you are going well when little adjustments can be made and they don't effect the other person and the performance.

Let me explain. As we sat on the start I had been backing the boat to keep the bow pointed into the cross wind. As the start did the roll call I let the bow start to swing. This is a pretty normal things for a bow seat and most rowers in cross winds. Well the bow kept drifting. Instead of me backing it I said to Josh to give a quick touch to keep it straight. He did and as the light went red behind the pontoon. I could tell the boat still was off line. The flash of the thought that went through my mind was we aren't straight I will fade the first stroke of two to make sure we stay in the middle of the lane. It didn't help our jump from the start as the light went green and the buzzer sounded but I made a call to ensure we would get away well and be dead centre in the lane. After about three strokes I felt I could get right into it and as if we didn't miss a beat we were off. Josh took it off the line as expected and stayed with the rhythm and intensity required. It would have been easy for him to change something and it could have cause issue off the line but thats the test of a partnership. Nothing can be said but all is felt and confidence must be maintained. Soon after this we were away and moving pretty well. What I am saying is it the little things that can make rowing together easy or hard. Trust in each other allows the kind of start to have no effect of speed really and doesn't change what you set out to do.

We had a great race and I believe many of the other pairs performed really well. The standard was shown in the heats with pairs doing 6min 22sec and missing out. This explains our thinking before the final also. It would be hot and hot early. The level of competition and quality of the athletes involved would create an exciting race. Josh and I were looking forward to this and discussed having our best row as a partnership. Up until this point we could be criticized maybe for not going faster in our final stages of races. I guess we focus or have focused more on our middle 1000 and then recently on being sharper out of the blocks. In the heat we went 3.07 high for the first 1k which is good speed. Our capacity to go very fast in the third 500 is a great asset and so until this race we hadn't fully committed or really worried or focused on the final 500.

Two guys who raced it out from the start were James Chapman and Will Lockwood. We only just got level with them at the 1000m mark and with Bryn Coudraye and Tom Swann being the fastest pair from the heats matching speed with us and the legendary light weight Anthony Eddy Edwards and his hugely capably partner Sam Belts right in the thick of it, it was on. Now the other pairs with big Nick Purnell and Cam Maxie McKenzie-McHarg and Brodie the new Aussie Buckland and James Marburg readying themselves for the thundering run to the line. Simply there was not much in it.

In our boat we were set to take off. Well placed near the front and rowing well enough that we had another gear to go. Sorry I should say we were going as quick as we could but excited about finding more speed. More speed, what a great feeling it is to be going well and to find that enthusiasm to lift, move and spread the wings. I love the idea of a bird taking flight from a watery start. The energy, motion, fluidity and dynamics required to build momentum and prepare to launch into the sky. Sure we don't actually go skyward but the thought and the imagery is one to behold. It's one to harness and attempt.

As the landscape of the race began to shift. The early moves with the new arrivals all dancing at the effort and fatigue ball. All trying for the timing of the race. The moment appeared and was present to enjoy. It's like catching a wave the ability to pick the swell, to turn towards the shore and to paddle like an animal to ensure you get the one you have marked. As it all unfolds you start to feel the rise, the lift and the anticipation for what must happen next.

Why have I gone into all this? Well it's because yesterday I had the experience with Josh in the pair which was spot on. Timed well and on the front of the curve. Sure i would like to think we can go faster but it was a very sound performance. Today in the eight much the same was intended and much was put into the same set up, but and here is the big but. The momentum and positioning could not or was not maintained. Contrast that to the NSW crew and they found what they needed and they seemed to stick with it and stayed with it. One of there crew comments how crap the last 250 was or at least that the step to the line was not ideal. Funny thing when you get the first 1500 to 1750 right and you have done everything you can. The last 250 you have nothing really left except to intend to go faster but reality is you usually pull it apart.

Yes we lost the Kings Cup and we won the pair. To opposing experiences in the 48 hrs. It's a fine line and what is awesome is that we have a great squad capable of finding the right mix and certain times. The test now is continuing to hone the skills and mindset and the work towards finding the pitch perfect sound of a crew in complete harmony on the best and right day in the future.

Like all good rowers we know some days we loose trust. Some days we miss the opportunity. Some days we do everything pretty much right and yet don't finding the flow, the looseness and the wave to ride. The test is not when it's easy but when it's harder. Less clear. Going super fast requires all to nail it together. Being able to have days, solid days and be able to go fast when the day is not quiet there is still probably the greatest challenge. A rare few are capable of this, not many. I have heard it said by a coach, Steve Spurling back in 1993 who was coaching the club eight that you have to be able to win races on your worse row. I have heard this repeated since and it was probably said plenty of times before this. It hold true if you are going to be successful in most outings and races. It also ups the anti somewhat as being able to win on your best row is obvious, take it beyond that and make your worst close to as good as your best and you have something special.

In the pair we have been close to the above and in the past in the pair this has been the case. Compare to our state eight which I feel was pretty good but not good enough for what ever reasons.

Between the pair and eight I am reminded also that belief is key and movement efficiency essential to ensure you can be in it and still find a way to crack it.

Last but not least was the four... How many words can I use to describe my anger at our steering braking or coming undone at the start. We tried to get down the course and tried to stay straight while trying to stay in the race. Fail on all accounts. Caused crash at the end and we were disqualified.

So the Nationals were up, down and completely round and round. Now on to the trials in the four.